My best friend Josh and his fiancée Alexandra joined us this long weekend. Additionally this was the inaugural trip on board for Cassy’s little dog Dexter who I must admit was very well behaved. The girls and Dexter sunned themselves on deck between quick lock transits and we were in Lac St-Louis by 14:00.

We picked up a good army buddy of mine, Dennis, at the Pointe-Claire Yacht Club (PCYC). Dennis is a character; he had made his way onto the yacht club property and docks where we found him having a drink with some random people on their sailboat. Fortuitously he had picked the right people because there was no space left on the dock for us to tie up to so we just came along side their sailboat so Dennis could hop on. Back out in open water we got the sails up and the engine off and generally spent a very pleasant afternoon on the water. Dennis is not only also getting married but is additionally a wedding animator/DJ. Needless to say the topic of conversation was dominated by all things matrimonial! A lot of good information was shared. I learned a lot. By late afternoon everyone was sailed out so we dropped anchor on the sandbar in the middle of the lake and went swimming. Well the boys went swimming, while the girls were wearing bikinis they preferred to continue bathing only in the sun’s rays. I donned the goggles and dove to see the keel damage incurred the previous weekend (see earlier post). To my amazement the damage was relatively light, small shallow scars. Interestingly the damage was pretty high up on the keel meaning it wasn’t just a couple of inches too shallow, this rock was sticking way up!
The BBQ was fired up and everybody pitched in preparing dinner. Delicious salmon and veggies. The weather was forecast to be calm overnight so we decided to sleep in the middle of the water. After a glorious sunset the booze started flowing and the music got turned up. We had a blast but the four of us who had travelled all morning through the canal faded fast leaving Dennis (always a ball of energy) to his own dance karaoke party! Dennis was ready to party like it was 1999 which was remarkable because the following day he was animating a mega stunt-motorcycle event! He’s a legend!

The next morning after a great breakfast we dropped Dennis off at PCYC and motored over to St-Anne-de-Bellevue, a nice little boardwalk town at the western tip of Montreal Island. We poked around the lake for a while, the girls still laying about the deck enjoying the sunshine. At one end of the lake we joined many boats anchored, a little party spot. Rest & relaxation filled the next few hours. While everyone was napping I started considering our overnight anchoring options on the chart. Josh and I debated the various options, none too soon because the wind picked up quickly and we (and all the boats) weighed anchor to make for safer harbour. It actually got pretty bad and the boat was rocking & rolling in following waves. Incredibly the two ladies napped peacefully below deck on the couches! I was amazed. When we finally dropped anchor in our chosen spot they asked where we were as if nothing had happened. Just goes to show how quickly one becomes accustomed to the motion of a boat (and how comfortable it is down below!)

We enjoyed another delicious dinner and then things got competitive; board games! Couples teams. After much rule checking and relationship testing prodding there were winners and there were losers. In the name of good sportsmanship I won’t name who was who... A good time was had by all and I’m still the Best Man at their wedding.

After a shmorgasborg breakfast we set off down the canal to get through the locks. There was just over an hour wait at the first lock so instead of keeping a holding pattern we tied up at the pleasure craft dock next to a huge motor yacht. We all took a nap and when they came over the loudspeaker announcing the opening we rushed out to get off the dock. I started the engines while Cassy and Josh untied our lines. It was rather windy and once untied was difficult to hold the boat to the dock. I called for everyone to get on but by the time Cassy made it to the starboard gate we had drifted too far from the dock. She wisely did not try to jump (a point in my safety briefing) and we did a whole about turn to pick her up again. You should have seen her poor face as we drifted away from her.

Unfortunately the return trip was not as efficient as the outgoing one and we again had to wait at the second lock. Here the pleasure craft dock was already full and thus we maintained a holding pattern for about 30 minutes. Another sail yacht was also in a holding pattern and we remarked on what a unique vessel it was. Upon entering the lock the sailboats typically all raft up together the biggest going against the wall and managing the lock lines. I estimated this other sail yacht was about the same size as us but since they only had two crew I thought with more hands on board we would take the wall position. This other sail yacht came in after us but was initially headed against the wall behind us. When the lockmaster yelled at him to raft up next to us he changed course and came very close to rear ending us, in fact his wife and I had to push him off. They were an older Ontario couple and once next to us we got to talking; it turns out this was their last lock before heading across the Atlantic ocean to Ireland. They had a 40ft iron sail yacht Grey Cloud he built himself! He had previously sailed down to South America and spent time exploring the jungles. Their French was inadequate so I helped translate the lockmaster’s instructions. I communicated their travel plans to the lockmaster and he told me from the looks of their disorganized vessel their crossing was questionable. I did not translate this part to them. When the lock doors opened we wished them well on their journey.

Another 15 minutes to the marina, a stop at the septic tank pump out and we’re back in our slip. The first time we stood on solid ground in the 60 hours. We unloaded the gear and bid our friends goodbye.
Another great sailing weekend! 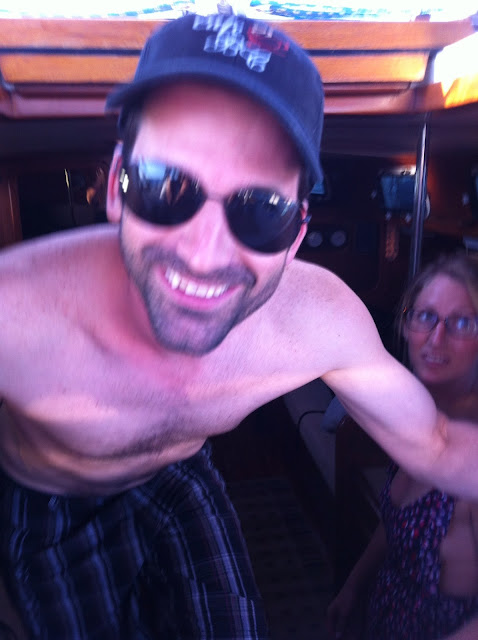 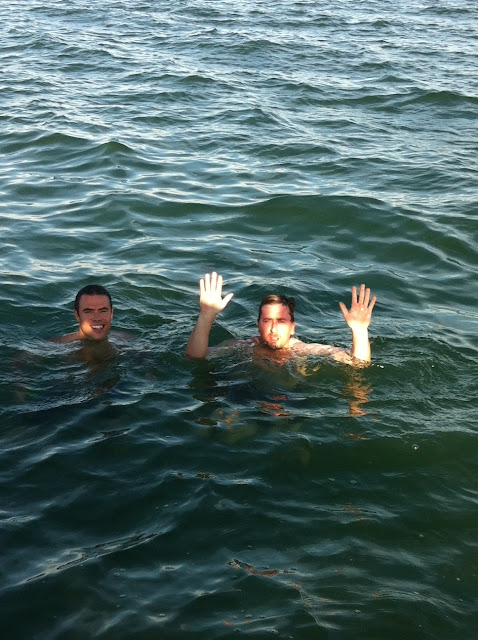 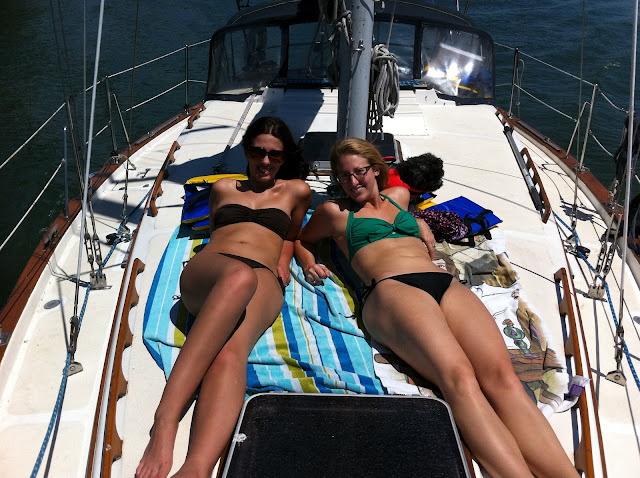 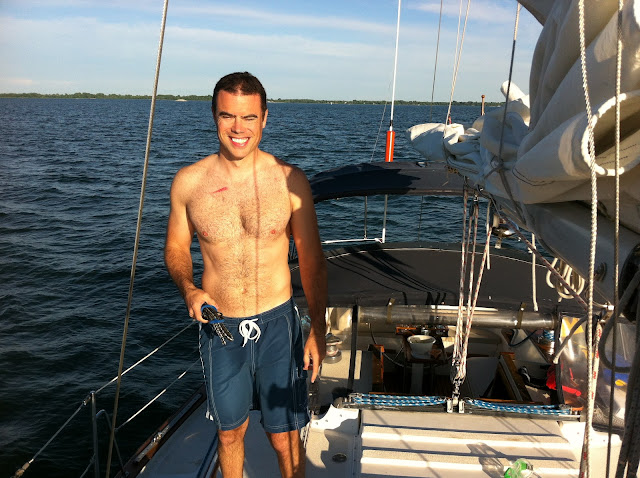 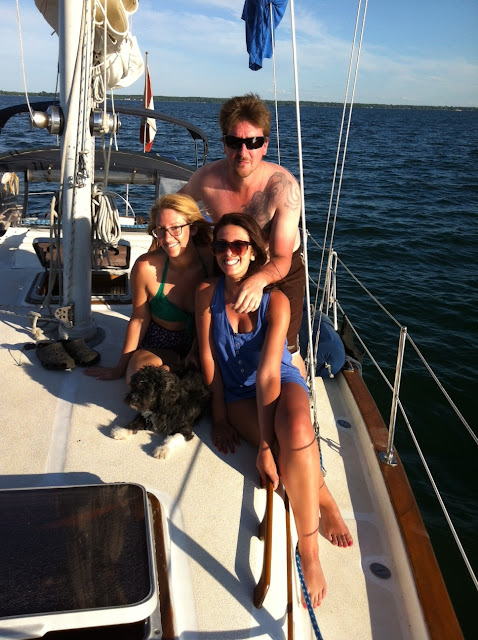 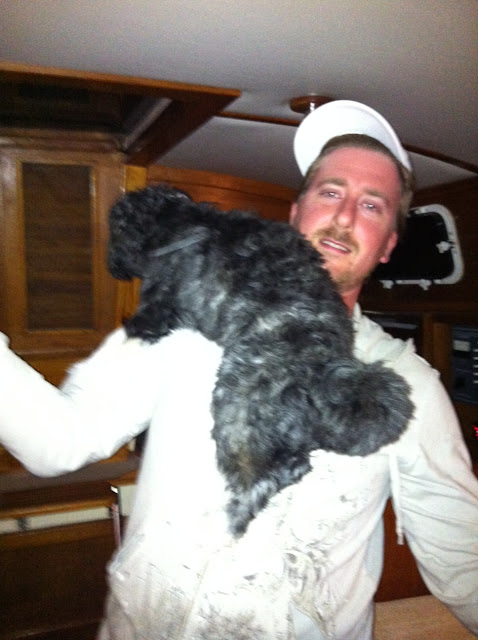