“I’M IN!” that was the response from Caroline B. to a weekend cruising invite. Caroline is the newest member of our Rushmore racing crew. She’s a wonderfully active girl who has focused in on sailing as an activity of choice. She’s even chartered a sailboat in the Caribbean (something I should probably do before heading down myself). Due to scheduling constraints she was the only person who could come aboard for the weekend. We were headed for a leisurely two days at the Iles de Bouchervilles (Islands), a small protected nature park on Montreal’s south shore. On hot summer weekends revellers raft up and party hard. I distinctly remember my new marina neighbour first describing these island parties; “if the provincial police tell you to turn down your music just disregard them, the water is federal jurisdiction!” This gives you an idea of what kind of parties go on (and an idea what a party animal my neighbour is!)

We set out late morning, got the sails up and engine off as soon as possible, cracked open some beers (as sailors are wont to do) and tacked downriver in light breeze. Usually we raft up at the islands with other boats from my marina but as we chatted away dodging freighter traffic and speed boats I got a call from my marina neighbour that they were having some mechanical issues and would not be joining. They did however recommend that we raft up with Waikiki, another boat from the marina, Jean-Guy and Josee, a couple I had thus far only said hello to in passing. They were already there and would be waiting for us to tie up to.

As we approached the bay we dropped sails and started the engine. The party was in full swing! There were so many boats; big boats, little boats. Muscle dudes and bikini babes everywhere! Music pumping! Our anchoring spot was all the way at the end and I had to weave through. Now this bay is extremely thin and manoeuvring a 35ft sailboat through the mess was not an easy task! Any wrong turn could cause a collision. To add even more pressure everybody is watching intently! It’s obvious that most revellers have never seen an actual real life sailboat up close! There’s a hush that rolls over the party. Jaws drop, fingers point.The mast, the wires, the ropes. “Look! the Pirates of the Caribbean!” It’s actually quite humourous and we really should take a video next time. Anyway ultimately we reached our spot and tied up to Waikiki. Jean-Guy and Josee congratulated us on successfully running the party gauntlet (they watched our mast approach for afar) and Jean-Guy offered us the “best Bloody Caesar you’ve ever had”. At that point there was nothing more that I wanted in the world and soon I was indeed sipping the best Bloody Caesar I’ve ever had.

We partied and swam in the sun all day. Before having too many drinks I went half-way up the mast and took some photos of the surroundings. Jean-Guy and Josee are great people and we had a grand time. Really glad we met them! We slept well at anchor. The next morning two more marina boats joined our raft and we continued to enjoy the good times. Early afternoon we were the first to depart; with light headwinds, only a little diesel engine and a mast height that prevents us from taking a shortcut, our return can take up to three hours (vs. 40 minutes for our motorboat friends). We weaved our way out again and once into more open waters stayed in the marked channel. There are some shallow areas and it’s especially important to be cautious. As we passed through the last set of safe channel markers into charted slightly deeper waters I increased the throttle a bit to about 4 knots. We were chatting in the cockpit with me standing at the helm when all of a sudden BANG! I flew forward onto the wheel, Caroline slide across the bench. The whole 15,000Ibs boat lurched up and came to a dead stop. We had hit something big, big and hard! Immediately I was sure were sinking! Adrenaline shot up. After making sure we were each physically OK I ran below to see where water was coming in. I grabbed the handheld VHF radio ready call for help. Below many of the floor access panels had popped up & out. The dining table had moved which is crazy because it’s bolted to the floor! I cleared the floor panels away but saw no water below. Up on deck Caroline had gone forward to asses; she came back to report that the anchor had dropped! The 15kg anchor had actually flown forward from the impact and was now resting on the shallow bottom. We hauled in the anchor and I was able to drive the boat away slowly. We were both in shock. That was by far the worst running aground I’ve ever experienced. The rest of the journey home was quiet; coming down from the adrenaline and reviewing what had just transpired. I checked all systems but all in all everything seemed fine and she was handling normally. I will get a bolt and wing nut to secure the anchor (I never thought it would ever come off like that).

I expect the keel damage to be pretty bad. The marina water is pretty gross with algae so I’m not too keen on swimming in it. Next weekend we’re going to Lac St-Louis with friends. When we go swimming I’m anxious to dive and see the damage then. I’ll report back with my findings in a future post. 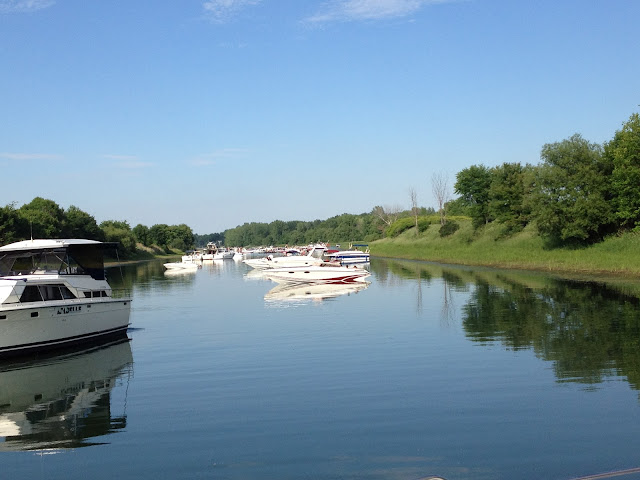 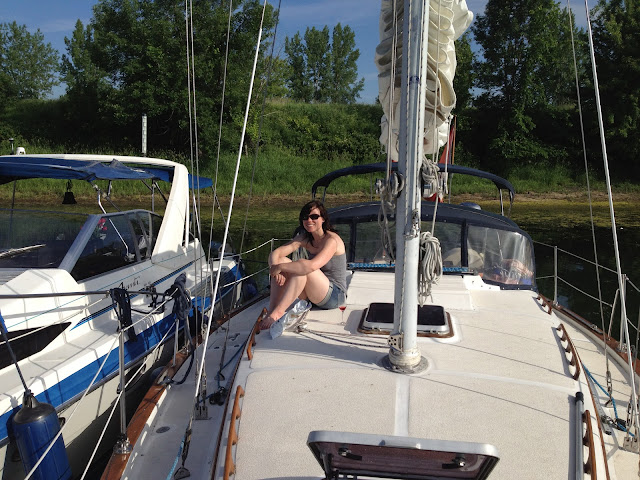 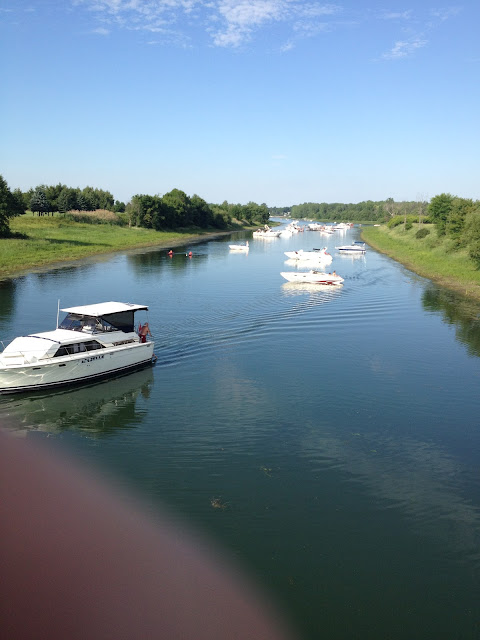 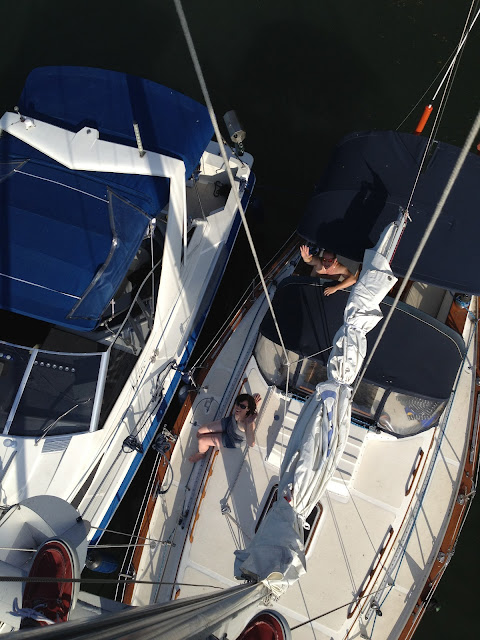 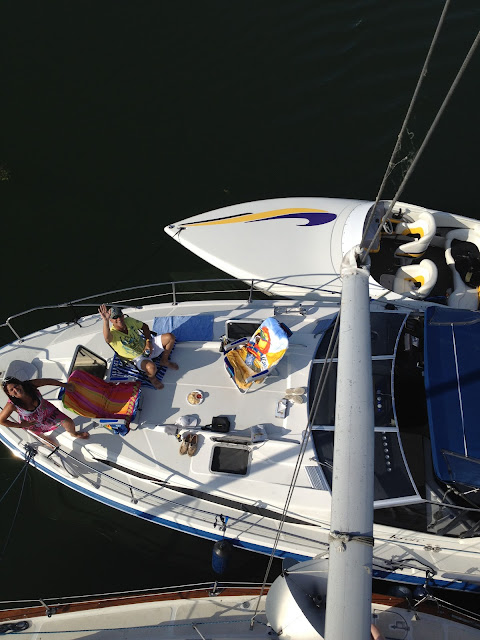 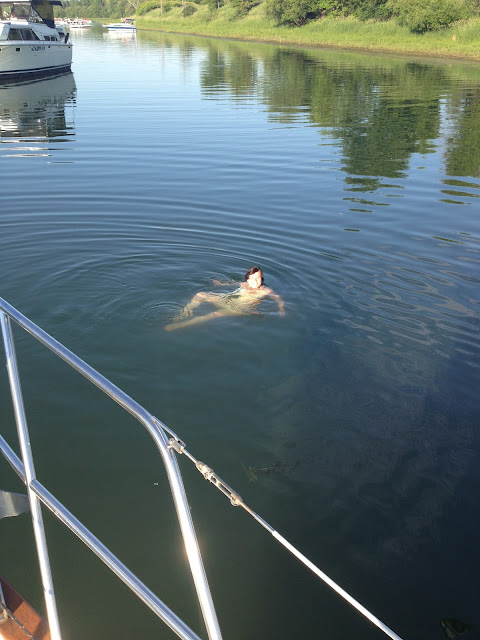