Topanga is a 35 foot sailing yacht. Built in 1984 by Florida's Endeavour Yachts 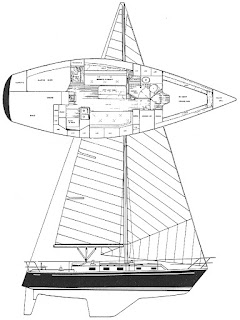 "Topanga" is Native American for "Where the mountains meet the sea". (and NOT a reference to the 1990's sitcom "Boy Meets World" character - which is typically the first thing people ask me!)

SEARCH
First let me say how happy I am that this phase is over! For the better part of a year this task consumed me. They say you have to see many boats before you can choose the one that's right for you, but that when you do you'll know. This is in fact exactly what happened to me. I had cut the search down to two vessels that met the vast majority of my criteria. one was of lower quality and less well kept and then there was Topanga, solid, quality, well kept... I could go on. Of course you get what you pay for and there was a significant price difference. As this was going to be the biggest purchase of my entire life I did a lot of agonizing, weighing and re-weighing the pros & cons, fiddling with my spreadsheets, but in my heart I knew the right choice. Topanga!

Much credit must be given to my good friend Dara who was an great help, support and inspiration in this endeavour (no pun intended); together we saw about 20 boats near and far including Topanga.

PURCHASE
Purchased in May 2011 from Morrisburg Ontario from Rob and Dianne Cope. Rob and Dianne maintained Topanga in near pristine condition in & out! We try and keep her equally well kept but consistently fall short. They are my inspiration (and motivating guilt). Additionally Dianne’s timeless decorative style makes below deck as homey as a country cottage.

Rob and Dianne upgraded to a beautiful 43 foot Catalina ME AND(h)ER on which they plan to spend their retirement cruising. Rob remains great source of knowledge on Topanga (I think she still misses him) They are wonderful people I hope they will be lifelong friends.

Check out the E35 Brochure