A few weeks ago a little sailboat showed up on stands in the Marina's parking lot. There was significant damage to the hull along the waterline. I heard around the dock that they had hit a buoy (can't really claim the buoy hit them) and had taken on water and started to sink. A radio Mayday call summoned the Coast Guard who apparently deployed some kind of balloon flotation device to save the vessel from sinking. Word around the dock is they had come from Australia to Hawaii, and then done what's known to cruisers as the “Great Loop”, down the west coast, through the Panama canal, up the east coast and through the Erie Canal to the Great-Lakes. Apparently they were headed west, by Montreal en route across the Atlantic to England when disaster struck. How unfortunate that having traveled so far they would have such a disaster befall them here. I guess it demonstrates how the strong current here in the mighty St-Lawrence river is like no where else. I was also struck at the miniature size of their propeller, which in my opinion likely made fighting the current next to impossible here. They had repairs done and the boat looked as if nothing had happened (I've noted the company that did them heaven forbid I should ever need such repairs).

This week I was joined by two new friends for an evening sail; Jacob, a Marina employee who has recently purchased his own boat and Richard, a colleague's husband who's sailed in the Southern Ocean on an 84 foot ketch for months. While the weather was bleak, the wind was excellent (a rare northerly breeze) and I thoroughly enjoyed having experienced sailors aboard. It was nice to focus on just enjoying the sailing without being distracted by the safety concerns of newbies. As we entered the marina we were actually discussing the trials & tribulations of the afore mentioned Australian sailboat and lo & behold there she was, in the water, but grounded at exactly the same spot I had gotten stuck a week earlier!(see previous posts) They shouted for assistance and after evaluating the situation we maneuvered Topanga around, to take a line from them and tow them off the bottom. This was the first time I've ever actually done this and I was quite concerned because 1- I didn't want to get stuck as well and 2- the maneuvering is so tight in the marina that we risked colliding with something ourselves. Given the experience we had on board though I evaluated that we could at least make an attempt and through great team work on my crew's part; me at the helm focused on maneuvering, Jacob communicating with the Australians and Coast Guard officer standing on the dock and Richard managing the tow line we succeeded in getting them safely to an adjacent dock. They shouted their gratitude and we made a smooth re-entry into our slip. Once secured, beers were cracked, hands shaken and a sense of satisfaction at having helped a fellow sailor in need. We celebrated our outing with a BBQ dinner, some wine and trading of sailing stories. 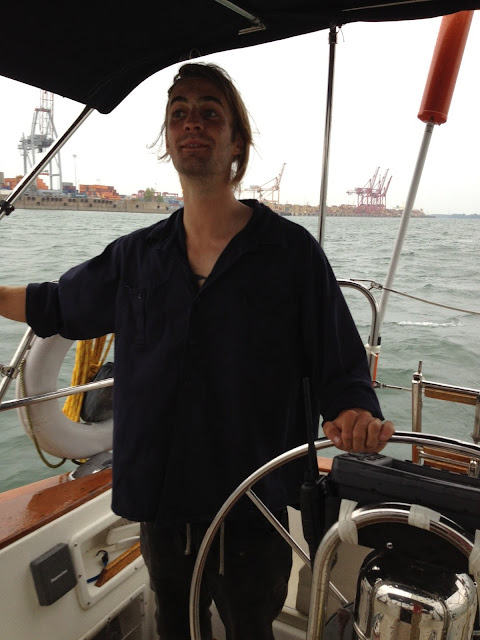 Posted by John C. Schulmam at 4:59 PM No comments:

It's officially a summer! Sailed on Lake Chaplain this weekend. Went down to visit with my wonderful cousins in upstate New York and got the chance to go out on Laughing Gull,my cousin's Mariner 19ft day sailer. For those who follow this blog regularly you'll know that this is where it all began for me as a child. It was a perfect sailing day with good steady wind and we crossed the lake on a beam reach almost all the way to Vermont on the other side. We only had the main sail up but we made good speed over ground regardless. It was so nice not having to worry about shallow water depths as we do in Montreal these days. Cassandra took a try at the tiller and once she got the hang of steering pointed us exactly where we wanted to go. A natural! The only thing missing from the excursion was chilled boat wine! Unfortunately the following day's weather was dismal but at least we got out once. My cousin was kind enough to give me a large fender that had washed up on her shoreline earlier in the season, much needed additional protection for Topanga's hull when transiting locks. Thanks! When we pass through Lake Champlain on our way to the Caribbean I wonder if we could moor on her ball, or if we'd be too big/heavy or too close to shore? 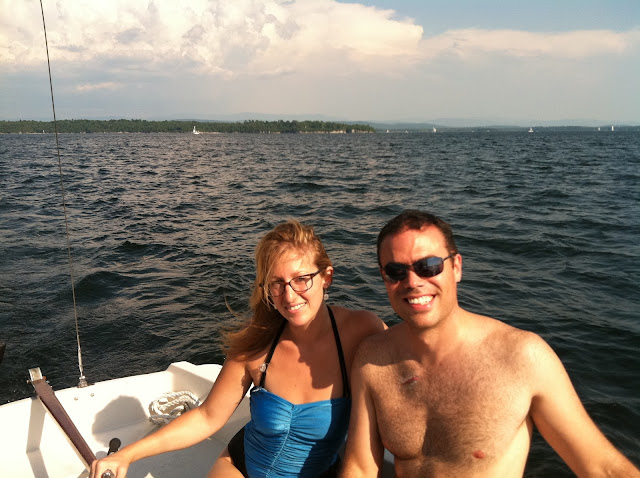 Posted by John C. Schulmam at 4:56 PM No comments:

Water is so low now we actually got stuck on the muddy bottom in the marina!! On our way out for a day sail on the river I wanted to make a stop at the pump-out / fuel dock but we got stuck about 20m before it. Tilting the boat with crew to one side and increasing engine power was enough to get us going again but c’mon! I’ve heard rumours that commercial ships are halving their loads in order to stay off the bottom in the dredged channels. I’ve also heard that the authorities are going to literally open the floodgates from Lake Ontario to increase water levels around Montreal.

Posted by John C. Schulmam at 4:54 PM No comments: